As part of Action and Adventure August I read Brian Falkner’s Brainjack which because of its future and computers- take- over –the- world focus would also fit quite nicely into this month’s reading.  So I thought I would explore more of Falkner’s work for this month.  I had mixed success.

The Tomorrow Code is widely acclaimed but I found it dragged and ultimately skimmed through the second half of the book.  The premise is two friends Tane and Rebecca work out that they have received a message from the future from their future selves.  This initially results in lottery wins and and other successes but ultimately results in them trying to stop future world/city destruction.

In contrast, The Project got me in.  It like Brainjack had prologue that captured my attention that was about the most boring book in the world.  The plot develops around the hidden contents of a book that explores Leonardo da Vinci’s theories and ends up involving time travel and possible world destruction.  I liked The Project because it was reminiscent of Dan Brown’s Da Vinci Code and John Birmingham’s Weapons of Choice/Axis of Times series. 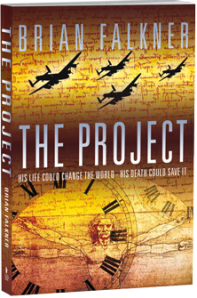 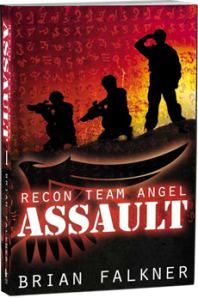 The third book Recon Team Angel: Assault 1 is set in 2030 and is similar to Muchamore’s Cherub series and Marsden’s Tomorrow series in that teenagers (are chosen to) infiltrate the enemy lines.  However, in this case, the enemy are aliens who have taken over Australia and Europe but not the Americas or interestingly NZ (Falkner is NZ).  The characterisation of the team members is not that strong but that is okay as the interest comes from the premise of aliens who have been here for years, then seek asylum and gradually take over the world.   There is also interest because there is a traitor in the team.  The team composition and the idea of the traitor were somewhat reminiscent of Ice Station. Indeed, I don’t think I have read another author whose influences are as obvious. This is not a criticism as it creates entry points to his books and vice versa to his influences. Book 2 doesn’t seem to have been released.

I am a secondary English/History teacher (BA DipEd, MA (Education) and a Teacher Librarian (MEd). I LOVE to research and through this site aim to -Support the introduction of the Australian Curriculum (especially in History) through sourcing quality and varied internet based sources (research guides) - Support teachers through conducting education based literature reviews - Provide suggestions on useful Web 2.0 tools - Offer other services such as curriculum writing, library collection assessment, novel recommendations (see my blog bookgenremonthly.com)
View all posts by hgtl »
« Speculative September James Roy – Ichabod Hart & the Lighthouse Mystery
Globaled.org lessons on Japan »